My aim is to provide a broad based expertise, communicating a love for bodies, an awareness of the benefits of movement and an understanding of its place in physical health and emotional wellbeing.

My focus is on providing opportunities that allow others access to dance, yoga, exercise and movement at many levels.

“Rosina Bonsu is an uncompromising woman, talented, sparky and with enough energy to beat the system.” Alice Bain, The Sunday Times, Scotland

Laura is an artist, writer, performer, and yoga teacher.

She has been practising ashtanga and pranayama for over 5 years. This has has helped her not only to make changes to her life, but to enrich it considerably by bringing into it discipline, compassion, patience, and letting go. Laura is taught by Rosina Bonsu, Kia Naddermier, Rose Ann McKean, Radha Warrell and Pierre Seghir, and has attended workshops with John Scott and Lino Miele, among others. She documents her early morning walks to practice with a daily photo in a blog called ‘Today, 7am’ (http://www.lauragonzalez.co.uk/7am/)

With over 15 years of experience as a mover, she is a performance artist and an Athenaeum Research Fellow at the Royal Conservatoire of Scotland. She has also taught art for 16 years in many places, including The Glasgow School of Art. All these experiences have made her acquire a sensitivity to the inner workings of the body, whether anatomical, energetic or emotional.

Catherine Hardy has been practising yoga since 2004.  A weekly practice at Glasgow University gym led to a foundation course with Gerry Kielty at Balance and regular classes with Maureen Smith, Anthea Simpson and subsequently with Cathy Moran.

As her curiosity and commitment grew, the weekly practice turned into twice, then three times a week. She experimented with Bikram, Iyengar, Power, aerial and Yin yoga and visited studios in New York, Istanbul, Gdansk and London.

Judi Farrell’s classes at Merchant City Yoga introduced Catherine to the Ashtanga tradition, learning the basics at the led class and attending workshops at Chi and Co and MCY with John Scott and David Keil.

She has maintained a weekly Iyengar based class with Maureen Smith, alongside Mysore style practice with Cathy Moran and occasional classes with Rose Ann McKean.

In addition to a 40 hour teacher training with David Swenson, she has had the privilege of practising under the guidance of Rosina Bonsu, Philippa Asher, David Robson, Julie Gudmestad, Hamish Hendry, Joey Miles, Peg Mulqueen, Jill Paget, Petri Raisenan and Yuval Ayalon.

Catherine graduated from the Balance 200 hour teacher-training course in 2017. 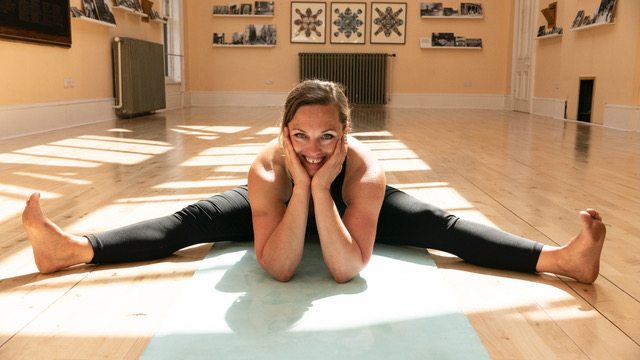 Sue first got curious about yoga in her early 20’s. Over the years she tried and practiced different styles before finding her passion for Ashtanga Vinyasa Yoga in 2009. Sue developed a daily practice when studying with John Scott & Lucy Crawford in 2011 & graduated from their Teacher Training programme in 2014. Sue continues to study with her main teachers John Scott & Manju Pattabhi Jois.

Sue’s teaching style is intuitive, nurturing, encouraging & playful. Sue endeavours to share & develop what she has learnt from her teachers.

Kate finally gave in to the persistent nagging from friends to go to a yoga class.  Hooked by the end of that first class with Rosina Bonsu, one class a week quickly turned into two a week, then three a week – and in the morning!  From reluctant yogi to one with a regular ashtanga practice, the benefits continue to unfold day by day, and year by year, and are a constant and wonderful surprise.

Kate’s main teachers are Rosina Bonsu, Kia Naddermier, Radha Warrell and Pierre Seghir, Laura Gonzalez, and Sue Crow.  She graduated from the teacher training course at Merchant City Yoga in 2019, where Judi, Rose Ann and Alanna (alongside all of the team at MCY) have taught, supported and inspired her on her teacher’s journey.